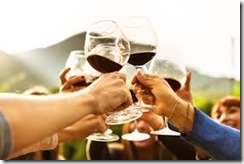 As state and local governments order people to stay home to limit the spread of the virus, toilet paper and canned goods are not the only items people are snapping up. Wine sales at wine shops are soaring and large, highly-distributed wine brands are struggling to keep wines on the shelf.

Meanwhile, small wineries that depend on restaurants and on-site sales are trying to figure out how to survive. The question on the mind of  everyone  in the wine business is what will things look like on the other side when we get the virus under control.

I’m no economist so I won’t speculate but on matters of wine economics The Wine Economist Mike Veseth and Silicon Valley Bank’s Rob McMillan have already started to tackle that subject.

Rob McMillan went so far as to offer a tentative prediction about when things might open up:

Timing of an end is the most difficult to predict, but I have a current operating guess.

Hmmm. I’m not so sure about this. According to most epidemiologists, even if we succeed in reducing the transmission rate of the virus, we are likely to see waves of resurgence until we get a vaccine or reach herd immunity. Even assuming a seasonal reduction when the weather warms up as with the flu, a possibility most experts are uncertain about, with the lack of immunity in the population, as soon we stop the social distancing, the virus might well go on the rampage again. We are likely to be playing whack-a-mole with the damn thing for many months.

Under such conditions, are people going to be willing to repopulate restaurants and tasting rooms? Unless we have comprehensive testing abilities including antibody tests and massive contact tracing to spot outbreaks before they take off, many people will be reluctant to resume their social activities. Our capacity for testing thus far doesn’t give me much confidence in that scenario.

Of course, as we saw last week with the beach hordes on Spring break, some people will throw caution to the wind in order to have their parties. Maybe there will be enough of them to make opening tasting rooms and restaurants worthwhile.

I think I won’t be joining them.