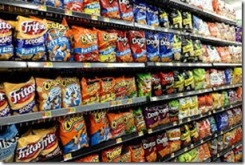 This research conducted by The Guardian along with Food and Water Watch is a comprehensive indictment of the food industry in the U.S. For those of us who have been watching consolidation in the wine business, this will come as no surprise. But the situation is much worse in the food industry.

For instance, PepsiCo controls 88% of the dip market, as it owns five of the most popular brands including Tostitos, Lay’s and Fritos. Ninety-three per cent of the sodas we drink are owned by just three companies. The same goes for 73% of the breakfast cereals we eat – despite the shelves stacked with different boxes…85% of the canned tuna we eat is owned by just four companies

Kraft Heinz, General Mills, Conagra, Unilever and Delmonte are the big guns in the market. And of course they dictate to major retailers which products get the prominent spots on supermarket shelves. And they contributed $175, 000,000 to politicians in the 2020 election cycle to make sure anti-trust legislation is buried or ignored. This means fewer choices for consumers. Walmart, Costco, Kroger and Ahold Delhaize control 65% of the retail food market. And it probably means higher prices as well since there is less competition, although the article doesn’t provide enough analysis of how less competition intersects with economies of scale.

Who benefits from this consolidation? Not the farmers.

This is good news for big corporations like meat processors, as it reduces costs, but bad for many farmers: total farm debt has reached levels not seen since the 1980s farm crisis….

Basically there’s a handful of individuals in the world, mostly white men, who make money by dictating who farms, what gets farmed and who gets to eat.

The result is that farmer’s are increasingly dependent on subsidies from U.S. taxpayers.

Farmers received $424.4bn in subsidies between 1995 and 2020, of which 49% were for just three crops: corn, wheat and soybeans, according to the Environmental Working Group. Corn subsidies are the largest by a long way – $116.6bn – accounting for 27% of the total. Very little corn grown in the US is eaten these days. Instead, more than 99% goes into animal feed, additives like corn syrup used in sugary junk food and, increasingly, ethanol, which produces toxic air pollutants when burned with gasoline.

It’s a cruel paradox, according to some campaigners, as subsidies incentivise farmers to grow just a handful of cash crops, a practice that floods the market, depresses prices and keeps them hooked on government aid.

None of these profits filter down to the worker’s who actually produce the food.

At least half of the 10 lowest-paid jobs in the US are in the food industry, and they rely disproportionately on federal benefits. Walmart and McDonald’s are among the top employers of beneficiaries of food stamps and Medicaid, according to a 2020 study by a non-partisan government watchdog.

So taxpayers subsidize farmers and  workers neither of whom can make a living working for “Big Food.” But “Big Food” then controls the politicians who keep their corporate tax rates low. The people getting screwed end up paying  for their exploitation. This is one sweet racket.

The environmental damage is also enormous:

Agricultural runoff is now responsible for 80% of excessive nutrients in our freshwater and oceans, which cause dense growth of plant life like algae that block oxygen from reaching fish and other animals.

In 2019, agriculture and aquaculture were identified as a threat to 24,000 of the almost 28,000 species threatened with extinction, according to the IUCN Red List.

The only part of the article I disagree with is at the very end:

I hear this kind of argument all the time and it is utter bullshit. You can support small farmers and grocery co-ops all you want. It’s virtuous and makes you feel good but it won’t matter. Acting as individuals we have no power to effect change. This is a political problem through and through and nothing will change until we get corporate money out of politics.

And that won’t change until we get rid of the corporate stooges on the Supreme Court.