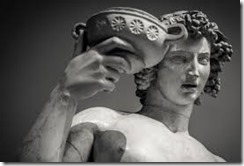 A bottle of Jack Daniels is intoxicating; so is the ambient music of Steve Roach. But they aren’t intoxicating in quite the same way.

Happily, wine is intoxicating in both respects. In sufficient quantities it causes the intoxication of drunkenness but the experience of tasting wine is itself intoxicating. The smells, flavors, and textures of wine can be moving and exhilarating just as the sounds of music can be when we direct our attention to them.

“The intoxication that I feel is not just caused by the wine: it is, to some extent at least, directed at the wine, and not just a cause of my relishing the wine, but in some sense a form of it. The intoxicating quality and the relishing are internally related, in that the one cannot be properly described without reference to the other….I have not swallowed the wine as I would a tasteless drug; I have taken it into myself, so that its flavour and my mood are inextricably bound together.”

Scruton’s analysis seems right up to a point but I doubt that aesthetic intoxication is wholly unrelated to the mild, alcoholic buzz induced by wine. The flush of exhilaration caused by the alcohol (in small quantities) seems to sharpen one’s anticipation, and lends itself to feelings of enchantment that may influence our perceptions and judgments. Even in contexts where I taste and evaluate many wines, and must spit and dump to remain sharp, enough alcohol is absorbed through mouth tissue and accidental swallowing to influence my mood. The attentional focus of relishing and savoring are important but I doubt that they are the whole story.

The intoxication of music may also depend on effects that go beyond savoring. Music influences our moods and expectations in ways that are likely to profoundly influence our judgments about the music.

Research on the physiology of the brain has demonstrated the role of neurotransmitters in our enjoyment of music:

Our experience of the music we love stimulates the pleasure chemical dopamine in our brain, concludes a new study produced by a slew of scholars at McGill University. The researchers followed the brain patterns of test subjects with MRI imaging, and identified dopamine streaming into the striatum region of their forebrains “at peak emotional arousal during music listening.”

Not only that, but the scientists noticed that various parts of the striatum responded to the dopamine rush differently. The caudate was more involved during the expectation of some really nice musical excerpt, and the nucleus accumbens took the lead during “the experience of peak emotional responses to music.”

In other words, just the anticipation our favorite passage stimulates the production of dopamine.

Scruton wanted to distinguish between intoxication I (drunkenness) and intoxication II (aesthetic appreciation) by insisting that relishing or savoring—a kind of critical inspection—is involved in the latter but not in the former. It is that moment of thoughtful reflection, and our ability to form a representation of the music or wine, that enables us to appreciate the finer points of both.

The study of neurotransmitters doesn’t explicitly address this, but I doubt that the production of dopamine while listening to music involves critical reflection, although it is likely the form of focused attention matters.

Thus, with both music and wine I suspect the dopamine deluge shapes our aesthetic appreciation independently of any rational representation of the aesthetic object.

It may be that the two forms of intoxication are more closely related than Scruton allows.

Dionysus would not be surprised.