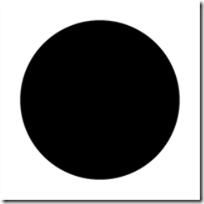 When I taste and evaluate wines, one of the most readily apparent feature of the wine is the wine’s shape and the way that shape evolves on the palate. Wines can be round, chunky, sharp, angular, contorted, flat, curvaceous, sculptured, sinuous, tapered, etc.  Wine of course is a liquid; it doesn’t literally have a shape. Nevertheless these shape words really help to characterize a wine. So what is going on here? Are these just metaphors?

Perhaps. But even if they are metaphors it remains to be explained why these metaphors can be readily understood. I doubt that people with some experience tasting wine would find it difficult to understand why a ripe Pinot Noir from the Santa Lucia Highlands is described as round or a Sancerre is described as angular. Since they are readily understandable they are likely not poetic metaphors. Their accessibility suggests there must be some literal similarity between wine and shapes.

Recent research shows that all of us are capable of making these associations. Test subjects routinely are able to reliably associate, for instance, milk chocolate with round shapes and dark chocolate with more angular shapes.

Interestingly, these cross-sensory associations appear to be transitive, that is, they extend to other associations with sounds and names (see Figure 3): Meaningless words like ‘maluma’ (Köhler 1929, 1947; Usnadze 1924, 1927) and ‘bouba’ (Bremner et al. 2013; Ramachandran and Hubbard 2001b) are matched both with more rounded shapes and, in Western populations at least, with milk chocolate. Meanwhile, angular shapes such as ‘takete’ or ‘kiki’ are matched with bitter-tasting foods such as dark chocolate. We would like to argue that transitivity is not a property of metaphors, but rather a property of sensory mappings and associations (e.g., Stevens 1966).

Spence and Deroy, the authors of the linked survey, hypothesize that the association is not purely linguistic and thus not metaphorical. There are actual perceptual interactions between the sense modalities of vision and taste.

Additional research seems to show that viewing shapes can influence what we taste.

This research seems to show that there is a lot more going on in a wine than just fruit aromas. The area of cross-modal correspondences offers the potential for greatly expanding the expressive range of wine.