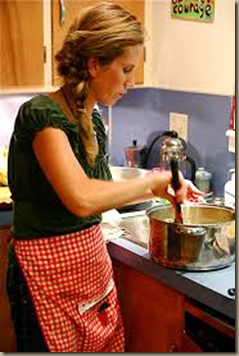 The conventional wisdom, often repeated by leading pundits in the food world, is that home cooking is disappearing with deleterious consequences to our health and the environment.  Americans, especially women trying to earn a living while being primary caretakers,  are simply too busy to bother spending hours in the kitchen when there is a whole industry out their ready to supply us with prepared foods at a modest price.

But food historian Rachel Laudan pushes back against this idea.

So what’s the truth of the matter?

*Two thirds of all calories are consumed at home

*Each day, more than one in two Americans between 19 and 65 cooks (or so they report)

*The poorer the people, the more they eat at home

The research she relies on suggests that food supplied from home decreased precipitously from 1965 to the mid-1990’s (when more women were entering the work force) but has leveled off since then.

As Laudan points out, there is some ambiguity in the research. It measures food from the “home supply” which could include prepared foods purchased at the supermarket. It also doesn’t seem to control for the lack of a fresh food supply in poorer, urban areas of the country. Poor people might eat more often at home if they had better access to markets. But the research is encouraging in that it shows that the home is still the site where Americans consume most of their food.

Why does this matter? As Michael Pollan and others have argued, food cooked at home tends to be healthier than prepared foods, and locally-sourced food is better for the environment.

But I want to point to other benefits of home cooking. This research shows that the kitchen, one central area where aesthetics and creativity enters daily life,  still plays a role. We can all use more beauty and creativity in our lives and kitchen activity can be the site of daily creative practice. But, in addition, it is important to create space in our lives where commercial interests do not rule. Yes, the food industry can supply us with the calories we need to function. But why turn our lives into profit centers for someone else? Why lose control over something so important as eating?

Presumably, we work hard to earn money in order to control the conditions of life. Why then relinquish that control to corporate interests?