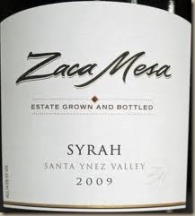 Syrah has gotten worse press than Lindsay Lohan. What ‘s the difference between Syrah and gonorrhea? You can get rid of gonorrhea, according to the on-going joke among industry sales people.

What is the explanation for Syrah’s troubles? There is the morality tale: Syrah reached its peak in the early to mid-2000’s when everyone was excited by Australian Shiraz (the alternative name for Syrah). In order to keep up with demand and make loads of cash, the Aussies dumped a lot of inferior juice on the market so consumers now think of it as a cheap, overly sweet beverage unfit for serious wine lovers.

My guess is that Syrah is a bit of a lost orphan—not as elegant as Pinot, not as sexy as Merlot, not as complex or age-worthy as Cabernet. Regardless of what you like there is always something that does it a little better than Syrah, according to its detractors (the wonderful Syrahs from the Northern Rhone notwithstanding.)  But, truth be told, Syrah often suffers from too much distracting sweet oak that masks the fruit and becomes cloying after the first few sips.

Syrah’s ill repute is not entirely undeserved but it is probably time to revisit this grape because there are some good ones around, including this one from Zaca Mesa—one of the pioneers of Syrah in the Santa Barbara region.

Deep, concentrated blackberry and smoky, charred cedar give this wine a black heart. But all this darkness is set off by sage, sweet spices and a svelte texture with lively acidity that sits nimbly on the palate despite the big flavors. Think Jack Sparrow—a roguish pirate with surprising agility and a big heart. The finish is long and powerful, the tannins still a bit dense. This wine is drinking well now now but could use more time in the cellar.

The structure of this wine is secured by the disciplined berry flavors that persist all the way through the finish. The oak adds much depth but is always under control. Powerful and well-made, it avoids all of the pitfalls afflicting Syrah–a fine example of what Syrah can be when made by a top producer at this price level. Great quality for the price.