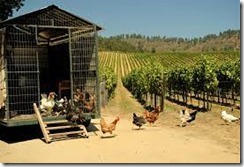 Bio-dynamic farming has a mixed reputation. Many of its practitioners produce excellent wine and idea of a farm as an organism makes intuitive sense.

But the movement has been blighted by some of the kooky ideas of its founder Rudolf Steiner, which included virulent racism,  the belief that illness was caused by problems in a previous life, not to mention the silliness about the spiritual power of cow horns filled with manure or certain astrological signs being optimal months for wine tasting.

Nevertheless, some biodynamic producers have developed thoughtful, empirically driven approaches to biodynamics. Craig Camp of Troon Vineyards is among the most articulate. If you want to understand this rapidly growing approach to viticulture it’s worth paying attention to what he has to say.

You don’t have to talk to too many biodynamic winegrowers to understand that they are not practicing some sort of belief system but are pursuing exploration in search of what works on their farm. There is no more critical cornerstone of biodynamic farming than the concept of the whole farm as a complete organism. The framework of biodynamics only provides a starting place in this exploration. Once the basics are in place — the evolution begins. A most biodynamic concept.

To my mind, this has always been the key to biodynamics:

From my perspective, farming biodynamically is more about hard work than spirituality. Oddly enough, the most spiritual thing may be the hard work itself and the connection it builds between you and your farm.

The close attention biodynamic farmers must pay to every aspect of their vineyard ecology is bound to produce positive results if they are willing to adjust their practices to what works.

There is an enlightened form of biodynamics practiced today, which respects the past, but is fueled by the emerging science of regenerative agriculture. On our farm, we have extensive data showing better utilization of available soil nutrients, decreased populations of microorganisms associated with poor soil health, reduced levels of water stress, and dramatically improved YAN levels at harvest.

The thing is — if it wasn’t working we wouldn’t keep doing it.

Steiner was no farmer and many of his ideas were dangerous. His ideas, called “anthroposophy,” were more religious than philosophical and had no empirical basis. In short, he was a quack. But many of his followers, especially Ehrenfried Pfeiffer, developed  them into workable ideas that could be used on the farm.

The movement would probably be best served by minimizing Steiner’s role. It isn’t the first successful idea with questionable origins.