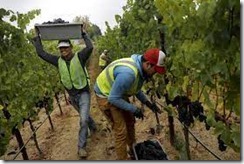 In general, it’s complicated to mix aesthetics and ethics. Some great works of art were created by assholes and worse. Caravaggio was a murderer. Gaugin molested Tahitian children; Elvis stuck closer to home. Miles Davis’s vanity and abuses of women were legendary. I could go on and on; it’s a very long list.

It doesn’t make their work less great, although we all have to make our own decisions about whether we will be patrons of their work.

The same issue arises in wine. Some winemakers are jerks. I will usually avoid drinking their wines. There are just too many good wines around to bother with them. But I’m not about to do background checks or interview their families.

Nevertheless, I think Valerie Kathawala at SevenFiftyDaily is on to something when she argues that natural winemakers have a special obligation to their workers to pay good wages and provide safe, humane working conditions:

Selling natural wine involves a narrative about holistic farming, intimate scale, and transparency of methods. So while the wine industry as a whole has much to answer for when it comes to issues of worker welfare, it’s a question that falls harder on natural producers, who stake their claim on making ethical, kinder-to-the-planet wines that align with the conscious consumer’s values.

The issue is not so much mixing aesthetic judgments with moral judgments. It’s a matter of brand identity and consistency. If you advertise your wine as a product of moral commitment and virtue then you have to deliver the goods. And natural wine enthusiasts are renowned and often vilified for insisting on the moral superiority of their production processes.

The moral commitments of natural wine producers tend to be about sustainability and environmental issues with a dose of concern for the community and local welfare. But there is no reason to consider social justice considerations to be less important; they are in fact part of the communitarian ethos.

So I see no way for natural wine producers to avoid taking the lead on these issues of social and economic justice, especially because their most avid consumers are likely to demand it.

“Is this going to be another example of Americans going around the world, putting their values on other people, and causing a mess when they don’t even understand the cultural implications?” she wonders.

But the same worry applies to environmental considerations as well. Yet, that doesn’t dissuade her from making sustainability claims regarding the wines she imports.

Alice Feiring rightly worries how we could develop standards of treatment when many small farmers and producers use family, friends, and volunteers to do some of the work. But she then launches a bit of whataboutism.

In her view, scrutiny should be directed at less widely reported transgressions by conventional producers, whose scale, power, and potential to do harm dwarf those of most natural winemakers.

No doubt the exploitation of labor is a much larger problem among conventional producers. But they aren’t the one’s crowing about virtue. Deflection is not going to be a successful strategy.

The biggest problem is the practical one of how compliance with labor standards can be enforced. It’s a problem that will require an answer.

The natural wine movement has pushed the conversation about farming much closer to the top of the list of considerations for a growing number of wine consumers. Now it has the chance to do the same thing for the welfare of winery workers.