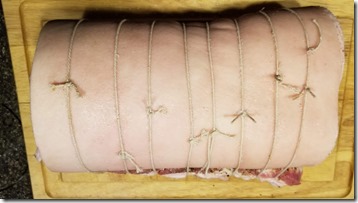 Wine, cooking, and family have kept me sane (or at least as sane as possible) during this pandemic. So this Christmas is going to be about wine, cooking, and (our quarantined) family. (But isn’t every Christmas?)

Porchetta is on the menu. The idea of porchetta sounds great. What’s not to like about a tightly rolled up, skin-on pork belly layered with garlic, fennel, and rosemary and cooked until the skin is cracklin’ crisp? But reality usually doesn’t live up to the idea.

I have made porchetta in the past but have been underwhelmed. It’s tasty but dry. By the time the center of a 10 lb. pork belly reaches 145 degrees in a hot oven, most of the meat is overcooked.

I did eat the dish in Italy, purchased from a street vendor in Umbria. It was also dry and make me ill as well.

The solution to overcooked meat is to cook sous vide. So this year I’m going to undertake sous vide porchetta. But it is an undertaking. 36 hours in an immersion circulator set at 145 degrees, then cleaned, dried, and deep fried to crisp the skin. The only container I have that will hold it is a painter’s bucket from Home Depot.

The wine? My son has a 2012 Brunello from Il Bosco di Grazia he’s dying to open.

The pork belly is ready to go. I will let you know how it turns out.

Happy Holidays to everyone!