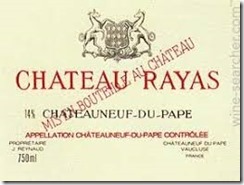 Robert Joseph has a fascinating article in Meininger’s about the relationship between quality and price entitled Is expensive wine worth the money?

He participated in a blind tasting and ranking of 24 wines all highly rated by France’s respected wine critics, Bettane & Desseauve and La Révue de Vin de France. 9 of the 24 wines in the lineup were from Châteauneuf-du-Pape, the highest regarded appellation in the Southern Rhône. The other wines were from lesser known regions in the south especially Languedoc-Roussillon. Although there were a few bargains in the lineup from CdP, most of them were quite expensive. The non-CdP wines more modestly priced.

So, what did we learn? Well, I was gratified to discover, when the identities were revealed, that my favourite, to which I gave 99 points, was also the overall winner: Château Rayas 2005 Châteauneuf, with an average score of 95.6.

This is not a surprise given the reputation of Château Rayas, and at 700 Euros it better be good. But the rest of the results did not really fall in line.

Four of the top 10 wines were from Languedoc-Roussillon rather than the Rhône, and half of the most successful eight wines in the tasting were also among the eight cheapest, ranging from €19 (Domaine d’Aupilhac les Coclières, Montpeyroux 2017) to €37 (Tardieu Laurent Gigondas, Vieilles Vignes 2017), which were ranked fourth and third respectively.

Joseph concludes that consumers of Châteauneuf-du-Pape are being irrational  and emotional when they pay hundreds of euros for a bottle.

That would certainly be true for someone who could not afford to splurge on wine. But let’s suppose price is no object or a secondary concern.

Origins matter to people because we feel emotional connections to them. Art lovers will pay millions for a genuine Picasso; only a few hundred dollars for an identical knock-off. Why? Because one was worked on by Picasso; the other wasn’t. Works of art are achievements; knock-offs less so. We build shrines at famous locations, e.g. in Williamsburg, VA or Mount Vernon, PA because that is the location of important events. Transport Williamsburg to the middle of Nebraska and I doubt it would be much of an attraction since the early settlers never occupied that ground. For well-heeled wine lovers who enjoy that style of wine, the storied vineyards of Châteauneuf-du-Pape are hallowed ground and wines from those vineyards are worthy of respect. Is that irrational? It isn’t obvious to me that it is.

Of course, one reason wines from Châteauneuf-du-Pape are expensive is because the region and certain producers such as Chateau Rayas have a great and long-standing reputation. Much of what you’re paying for is that reputation. If you walk into a wine shop looking for a special bottle, eager to try something new, do you take a chance on Languedoc-Roussillon or do you go with the wine with the reputation, Châteauneuf-du-Pape, again assuming price isn’t the dominant consideration. It isn’t obvious that it’s irrational to trust the reputation.

I do think in the contemporary wine world the calculation has changed a bit. One thing we are discovering is that really good wine can be made outside the classic, noteworthy regions. They have been making wine in Languedoc-Roussillon for centuries but it was noted for its bulk wine. Until about 20 years ago, no one bothered to make the investment in the region that would enable quality wine to be produced. The wine world is rapidly expanding with newly emerging regions dedicated to making great wine. If you think only the traditionally-respected regions can produce good wine you’re ignoring evidence. That is irrational. We shouldn’t expect  Châteauneuf-du-Pape  to always win out over Languedoc-Roussillon in blind tastings because quality has escaped the confines of tradition. But neither should we expect price to track intrinsic quality when reputational effects play such a large role.

Finally, there is one other factor to consider. Knowledgeable wine lovers will drink wines from a favorite producer or vineyard because there is something distinctive about the flavor profile that can only be found in wines from that source. On some absolute scale of wine quality (if there is one) the wine may not be quite as impressive as its competitors, but if it is distinctive, and the consumer enjoys that distinctiveness, why is it irrational to pay for it? Distinctiveness is among the most important values in the wine world and you will always have to pay for it because by definition it is rare.

So I’m skeptical of the claim that people who pay top dollar for wines they can afford are being bamboozled or dazzled by price. Obviously some are; many people are irrational. And I agree with Robert that “having a story” by itself is of limited value.

But when something is rare and distinctive it is worth having if you can afford it.