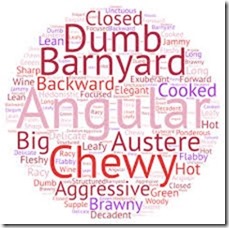 The wine industry faces many immediate challenges from climate change to competition from beer and spirits. But among those challenges is one you seldom hear discussed—we live in a culture that lacks a developed sensibility for aroma. Wine educator Deborah Parker Wong’s post on this topic is especially insightful.

In his 1966 book The Hidden Dimension, anthropologist E.T. Hall states that when it comes to olfaction, Americans are culturally underdeveloped. He attributed this deficiency to the extensive use of deodorants and the suppression of odor in public places, a cultural norm that has resulted in a land of olfactory blandness….Because odors have been repressed, they’ve never been coded by our culture; there’s no model in place to organize our olfactory life experience and, as such, our response to smells is measured in terms of relative pleasure. Simply put, we only react to odor. By contrast, cultures that attach symbolic meaning to odors like the Suya people of Brazil and the Onge of the Andaman Islands are said to think in smell.

This is why it is so difficult to talk about wine in a meaningful way. We can list aroma notes but it remains just a list with no larger meaning because we lack concepts that would make the notes meaningful. As Deborah points out, it’s not just a matter of lacking words that refer to aroma. The aroma wheel and tasting grids developed by certification organizations give us a rich descriptive vocabulary. What we lack is an understanding of how aromas can acquire symbolic meaning and provoke memory, and she goes on to describe how more scent-based cultures use aroma to make sense of their experience.

If we are going to expand our appreciation of aroma we will have to make more extensive use of metaphor to organize our experience. There is compelling evidence gathered by George Lakoff and others that all cognition and conceptual innovation is based on metaphor.

Which is why I get incensed when pundits in the wine world complain as soon as someone begins to use metaphor to describe wine. I was reminded recently of the classic in this genre published in Slate in 2000 by a professor of viticulture Jon Cohen:

I’ve had cheesecake that’s lush and creamy. Tequila and whiskey divide into smooth and rough. My wife is elegant, lovely, graceful, and even luscious. But contrary to what you read on the back of some bottles, these terms are meaningless when applied to wine.

This is the kind of bullshit that renders language useless in the development of meaning and threatens our ability to communicate about wine. Metaphor pervades ordinary discourse. “How do you spend your time these days?” “He immersed himself in the problem”. “The bar seems dead tonight”. These are all metaphors and they are crucial to our ability to communicate.  Obviously the list of useful metaphors is endless; what would language be like without them? The wine world cannot do without metaphor—even fruit descriptors are metaphors. There are no cherries in your Cabernet.

No doubt some metaphors are difficult to understand and some miss their mark; it takes talent to deploy them precisely. But without metaphor there would be no critical vocabulary and no way to relate disparate domains of experience.

As Parker Wong suggests, wine will acquire depth of meaning when we learn to deploy conceptual frameworks that link aroma and flavor to other domains of experience. And metaphor, symbolic meaning, will be fundamental to that process.