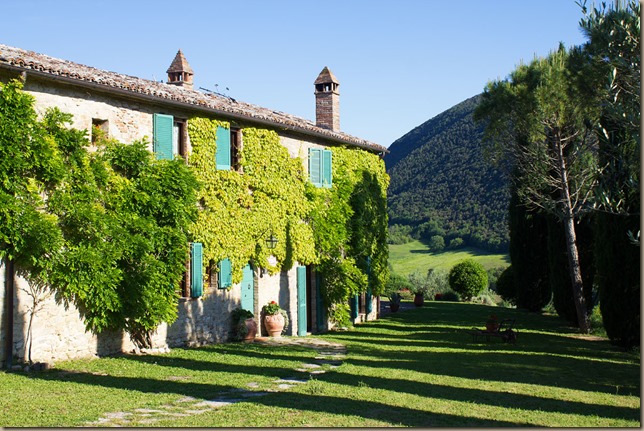 Tuscany gets all the attention from vacationers heading to Italy. Go there if you like tour buses, hordes of curio shoppers, and high prices. If something about that doesn’t appeal to you, Umbria is right next door—undiscovered, relatively inexpensive and simply gorgeous.

We arrived at the villa we are sharing with friends on Saturday after the usual travel frustrations, which were quickly forgotten, erased by the charm of this hilltop estate located a half hour from Perugia. 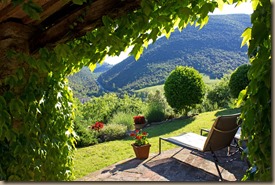 Umbria is a region of steeply sloping hills thickly carpeted with oak and olive trees, vineyards, and bursts of color from the wildflowers encouraged by the late spring rains that are now receding in favor of brilliant, sunny mornings,  warm, hazy afternoons, and breezy, chill evenings.  The forests hum with life, the air permeated with the fragrance of rosemary and the scent of assorted blossoms, and birdsong drowned out only by the sound of your own footsteps. This is a different kind of travel for us—rooted in one place rather than dashing about, seeking repose rather than revelation. 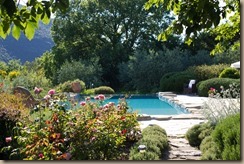 After a day of rest and recovery my first activity was preparing a welcome meal in the Italian style—a multi-course dinner for six that unfolded over several hours and which included a variety of antipasti—roasted eggplant salad, salmon foam served over radicchio, and a bean spread and truffle-topped bruschetta—mushroom risotto, pork braised in milk with roasted potatoes, and creamy gelato drizzled with limoncello. Wine stars included a lovely Fiano di Avellino and a Taurasi,  both from Feudi  De San Gregorio secured by Adam and Joey on their brief tour of southern Italy. 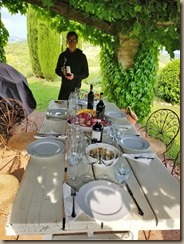 this part of Umbria is known for its Sagrantino. My introduction to this little known varietal was a 2006 Della Cima from Villa Mongalli. Age had softened the notoriously tough tannins and this wine made a favorable first impression—it’s Chianti on steroids, cherry and earth but with muscle and concentration. The winery that figures out how to tame the tannins when young will put this varietal on the international stage.

Day three included a truffle hunt. It’s early June, several months away from prime truffle season. But in this part of Italy they harvest summer truffles—a less expensive, less flavorful version of the Burgundy black truffle which will not be available until September. 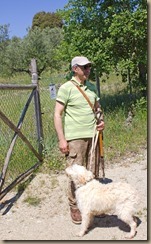 Female pigs were traditionally used to hunt truffles because they have a good sense of smell and respond to a male sex hormone which is part of the chemical make up of truffles. But the use of pigs here is outlawed because they destroy the truffle beds which must be preserved if the beds are to be productive in subsequent years. Thus, dogs trained to lay down when they smell the truffle are used instead.

I expected an arduous and likely unsuccessful trek through wilderness in order to find the truffles. But truffle hunter Massimo knew the general location where truffles are likely to be found and Yuma the truffle dog dutifully followed his commands, successfully discovering several truffles in the first half hour of our hunt. Yuma received a treat after each success but the dog seemed to need little encouragement, plunging into the hunt with tail-wagging enthusiasm whenever Maximo pointed at the happy hunting grounds. 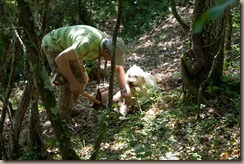 Alas, despite the successful hunt and stimulating hike, the results were a bit disappointing. Summer truffles are not nearly as aromatic or flavorful as autumn truffles—they have a faint nut-like flavor and subtle earthy aroma but lack the explosive pungency of the black or still more powerful white truffles. 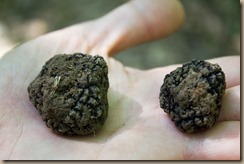 The culinary discovery of the day was actually the wild asparagus that Massimo harvested for us.