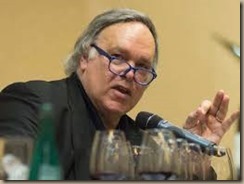 In order to appreciate a wine two conditions must obtain:

(1) Tasting the wine or accurately imagining it based on reliable perceptions of a component or stage of the wine; (for more detail see this post)

and (2) Responding appropriately to the wine. (See this post  and this post for more details on appropriate response)

Given this account of appreciation, we can now say what wine criticism is.

The second condition of wine criticism is that the critic seek to communicate the properties and appropriate responses to those properties that a wine makes available, as well as reasons for why those responses are appropriate. The critic’s aim is not just to describe the wine but to enable the reader to understand that these properties are worthy of their attention and invite a response, whether positive or negative.

The critic is responding to what is good or bad in a wine and is reporting that the wine moves her in some way and is letting the reader know how she is moved and to what degree, often by interpreting or elucidating features of the wine. Thus, the critic doesn’t simply inform us about facts but about facts that matter and explaining why they matter. For instance, making readers aware that a winery ages in amphora might make the wine’s minerality more evident and important or highlighting the herbal notes in a Syrah may get drinkers to recognize the wine’s complexity or relationship to other wines.

As Terry Theise writes in his recent book What Makes a Wine Worth Drinking,”If a wine doesn’t cause us to notice it why are we drinking it?” The critic must convey what’s noticeable about a wine that calls us to respond to it.

Thus, the wine critic’s job is to make readers aware of a wine’s features,  communicate the kinds of responses available because of those features, and what the reasons are for those responses. A critic could make readers aware of a wine’s features but fail to get them to respond appropriately because having the appropriate response is often up to the reader. The critic’s job is to explain what responses are available.

Because the critic’s job is to report what responses are available including her own response, there is an inherent subjectivity involved in wine criticism. The ultimate goal of the critic is not objectivity but to enable a reader’s responsiveness by using the critic’s  own response as a reference point.