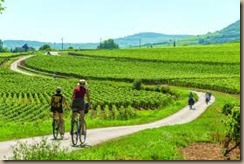 A daily sample of thoughtful writing and discussion from (mostly) independent wine blogs:

Alder Yarrow urges all wine lovers to contribute to the GoFundMe campaign to get the consumer’s voice heard in the upcoming Supreme Court case concerning interstate wine shipments.

Kathleen Willcox reports on the disabilities law that is causing problems for some wineries.

Lisa Johnston speaks with the Bourgogne Wine Board’s Amaury Devillard about the latest news from Burgundy.

Drunken Cyclist has the latest news on the lawsuit against WTSO *Wines ‘till Sold Out, a case he’s been following for some time.

Sarah Lehman reports on the sweet wine wines of Bordeaux, including Sauternes.

Kelly Magyarics gets to know the other Cab, Cabernet Franc, and reviews several from California, Virginia, and New York.