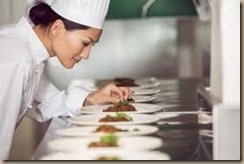 Thus, imagination and creativity go into cooking, often at a very high level, at which point it is called haute cuisine. But there is nothing that rises to the level of true art in a craft whose very existence depends on the constant replication of a dish, night after night, week after week. The replication of a series of stencils, even if originally designed by Raphael, does not constitute art, and I’m sure Andy Warhol was mumbling all the way to the bank when his work went from reproducing Brillo boxes to having assistants mimic his own work.

The claim that individual dishes are reproductions and thus cannot be original works is simple nonsense. Mariani apparently has never heard of a recipe. He is right about paintings.  Copies of paintings are indeed mere reproductions, not original works. A print of the Mona Lisa is not a work of art because painting is what we call in aesthetics  an autographic art—only the painter can directly cause the work to exist, and there can be only one legitimate instance of it.  Passing off a copy as an original is forgery.

But many arts are not autographic but are instead allographic. An allographic work has a master recording, score or some other form of notation from which individual works are derived. Thus, for allographic works, copies of an original are genuine instances of the original. My copy of Hamlet is a work of art even though it is a duplication of the original. The bookstore is not routinely guilty of selling forgeries. A streaming version of a Springsteen tune or live performances of Beethoven’s 5th Symphony are genuine instances of works of art despite the fact they are reproductions.

Cooking is similarly allographic. Individual dishes are instances of a recipe just as a performance of Beethoven’s 5th Symphony is an instance of its score. So the fact that line cooks churn out 25 copies of a dish in no way shows that cooking is not an art–unless Mariani is prepared to claim Beethoven and Shakespeare are mere craftsmen.