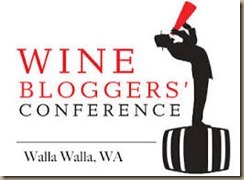 At the recently concluded Wine Blogger’s Conference the wine flowed freely and it wasn’t the cheap stuff. Wineries want to show their best and tell their stories to people who will, after all, be writing about them. So we were treated to four days of the best the Pacific Northwest had to offer—and it was considerable. Washington State has found the mother lode of quality with their Syrah, Merlot and Cabernet Sauvignon. I obviously could not taste everything but here are the wines that stood out. It’s not surprising that one of my favorites was an Oregon Pinot Noir. But the big surprise was a really big surprise. See below.

For me the best wine of the conference, complex, intensely fragrant and elegant. Every Syrah I tasted from the Rocks District had a distinctive mineral note, instantly identifiable, with blue and black fruit, bacon fat, dried herbs and black olive.

A blend of Merlot (59%) Cabernet Sauvignon and a bit of Cab Franc, this is ripe and luscious but savory with intriguing herbal notes and well structured fine tannins. 40% new French oak on the Cabernet.

Dark Cherry and savory notes with a beautiful seam of graphite, creamy and lush in the mouth with an elegant evolution finishing with beautifully chiseled tannins despite its relative youth. From old vines, aged in new French oak.

In a blind tasting of 8 high end Red Mountain Cabs, this was the one that stood out. From 40 year old vines, the oldest on Red Mountain, rich blackberry but earthy and meat notes as well. On the palate it’s harmony in a glass.

Certainly the surprise of the conference at $12 per bottle. I’ve tasted many Chambourcin, a French American hybrid grown in the Midwest and East. It’s usually undistinguished and often undrinkable. But this version from Stone Hill is one of the best I’ve had. Jammy black fruit, floral and caramel notes, and black pepper,  this is silky smooth on the palate with soft tannins.