In the wine world today, the “spirit of the age” is the pursuit of pure fruit expression. Find a healthy vineyard site where the grapes have character and will ripen without losing acidity. Experiment with fermentation until you find that magical extraction point where fruit, tannins, and color are in balance. Give it a kiss of oak to add complexity and roundness. Filter and fine to get rid of off flavors and aromas, and you’re well on your way to high scoring nirvana. This approach has created the modern, hugely successful wine industry and critical standards have developed that reflect that success.

I respect and enjoy polish, clarity, and clean, focused fruit power. But it doesn’t make me fall in love. Maybe it’s the old drummer in me, but what I really love is a bit of funk, aka “barnyard”, “animal”, or when euphemisms are in order, “savory”. Often, these flavors are the result of a brettanomyces infection that most winemakers go to great lengths to eliminate from their wine and which all the wine tasting certification agencies treat as a fault.

I guess I’m a bit out of step with the spirit of the age. It wouldn’t be the first time.

So I was excited to visit with Christopher Howell, winemaker at Napa’s Cain Vineyards and well known for his use of brettanomyces as a flavor element. Chris is also one of the most thoughtful winemakers I’ve met, very comfortable putting wine in the larger context of the humanities and talking meaningfully about his philosophy of winemaking.

Brettanomyces bruxellensis, or “brett” as it’s called, is a yeast which, along with its close cousin dekkera bruxellensis, infects winery equipment, barrels and sometimes grape skins. They create compounds that result in various aromas some of which are intriguing, such as sweaty saddles, bacon fat, or barnyard, and some that are just unpleasant such as band-aid or rancid cheese. Some people are quite sensitive to these compounds and will be put off by even a whiff. Thus, many winemakers strive mightily to eliminate any trace of it. In some cases an entire winery will have to be dismantled and rebuilt to eliminate the yeast spores that keep on giving vintage after vintage.

However, for others, the presence of a modest brett aroma gives wine character and interest and some of the great wines in history have been influenced by brett.

“How did we learn that this was wrong?” Chris Howell asks. “We value civet in perfume. Why not wine? It’s all about context”, he says, as he goes on to explain that our preferences for particular aromas are very much a cultural artifact, learned from the social environment around us. The clear implication is that maybe our tasting practices and wine education materials should not lump brett in with cork taint or the presence of hydrogen sulfide which are always unpleasant. 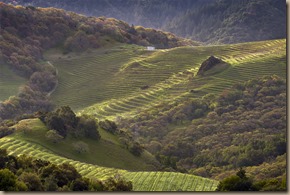 The trick of course is to know how to keep brett  at acceptable levels. “We don’t know how to manage brett yet”, says Chris but adds optimistically, “it always stops. It’s a fermentation and we kind of know when it’s going to stop.” The science of brett management is still nascent. After all, why study something that most people want to get rid of. But clearly Chris’s 28 years of experience with these vineyards and his wine education in France give him an instinctual understanding of how to assess brett levels and potential development. As you can see from my tasting notes below, the brett character is subtle and more of a background note. “It shouldn’t be the dominant flavor component”, says Chris. It adds character without being the character.

The value of brettanomyces is not the only issue about which Chris Howell walks off the beaten path. Another bête noire of modern winemaking is the presence of bell pepper aromas in Cabernet Sauvignon. The result of compounds called pyrazines, they do mar fruit expression when too dominant. Yet, not all green notes are  unpleasant. “Cab should carry green notes if that is what your vineyards give you. Everyone thinks it’s bell pepper so they just get rid of it”, according to Chris. “But it’s part of what makes our vineyard distinctive.” Once again it’s a matter of degree. If there is enough complexity and evolution in the wine, the smell of green herbs—mint, sage, rosemary– becomes complimentary adding character to what otherwise tastes like fruit juice. “I like wines that transcend fruit” asserts Chris, and indeed his wines have an herbal character that hearkens back to an older style of Napa Cabernet before the the fascination with fruit bombs became the rage.

“We don’t have to please everyone. Some people don’t like our wine and that’s fine. I just want them to suspend judgment and approach them with an open mind.”

That said, Chris’s wines nevertheless have that glow of California sunshine–rich, dense and powerful, with exuberant fruit expression yet with an complex array of non-fruit flavors creating contrast and intrigue.

I would be remiss it I didn’t mention one other important contributor to Cain Vineyards’ signature wine, the Cain Five. That would be elevation.

The estate vineyards slope downward from near the crest of Spring Mountain with a spectacular view of Napa Valley at elevations that range from 1200 to 2100 feet. The combination of intense sunlight, shallow soils, and good drainage often produce smaller berry size and tougher skins in mountain fruit. Notoriously, the tannins in mountain wines can be hard to manage but produce powerfully structured wines when given time to develop. Cain Five, their signature blend from estate grapes, is no exception. It is a firm, fiercely tannic wine that manages to be elegant and supple as well. That sounds like a paradox but paradox is the essence of great wine.

These wines are as original as the person who makes them.

Cain’s wines illustrate something that I’ve been calling “resonance” and is a feature of all great wines. They build in intensity, starting with an undercurrent of tension in the midpalate that keeps broadening in the mouth even after peaking and beginning to fade. There is duality in the wine. The satiny mouth feel and fresh, round fruit gives way to rising intensity emerging from the background as the acidity and tannin begin to dominate, the fruit reappearing again as a pale image on the finish. Especially as the wines age, both the acidity and tannins seem fragile, but they somehow take over and drive the momentum. My point is that this is a play of forms in transition like the tonal effects operating in the background of a symphony. Great wines are not static; they form themselves in the mouth. Resonance is the key to greatness in wine. Lesser wines are pleasing but lack resonance. There is no better place to discover resonance that at Cain Vineyards and Winery.

Here is the lineup of wines that we tasted starting with the young uns:

A blend of two vintages, 2012 and 2013, with fruit from both Spring Mountain and the valley floor, and a blend of Merlot, Cabernet Sauvignon, Cabernet Franc and Petite Verdot.   Just a hint of barnyard, against a background of baked earth, this is a hearty wine with some rusticity on the finish. Quite savory with notes of blackberry bramble, toast, and French roast coffee on the palate, and a hint of bitterness on the finish, the tannins are fine grained and quite accessible. Juicy up front it acquires a relentless inner drive, defiant and a bit feral.  Score: 90  pts.  Alc: 14.3%  Price: $35

Their signature wine is outstanding, stunningly complex. Rich, deep blackberry fruit but with savory herb highlights, thyme,  hints of caramel, a slightly smoky, saddle leather aroma, a bit of licorice and floral notes emerging midpalate round out the aroma notes on this very complex wine.  Deeply concentrated, it gives an initial impression of being sumptuous and elegant yet it’s powerful, exuding a kind of spiritual calm but with latent energy pulsating below the surface. Concentrated fruit, incisive acidity and broad, dry yet refined almost talc-like tannins create a sense of massiveness in the background that bely its welcoming surface. This wine is about contrast held in suspension. Made from 100% mountain fruit from estate vineyards, it’s a Cabernet dominated Bordeaux-style blend. Score: 94 Alc: 14.3% Ave. Price: $123   Peter Gabriel’s Rhythm of the Heat captures the spirit of this wine.

A Cabernet dominated Bordeux-style blend from Rutherford bench grapes grown on the valley floor. This wine shows a bit more red fruit in the mix–voluptuous black cherry, cocoa, sage and dusty earth–but lacks some of the funky flavor of the other cuvees.  This wine has a lovely, round mouthfeel, which is not surprising since the fruit is from the Rutherford bench and has the character of more typical Napa Cabernet. It is lush and generous right from the introduction with bright fruit notes persisting through the long, languorous finish. Happily, the oak is already very well integrated. This is more intimate, romantic, and stylish than the Cain Five, yet it still has a firm backbone. Score: 93  Alc: 14.6%   Ave Price:$93   Robert Palmer’s Addicted to Love nails the attitude.

This has warm, generous fruit and earth, ripe black cherry, saddle leather, thyme, and subtle roasted meat on the nose. Full and concentrated on the palate, the midpalate shows some softness that is disrupted by hi-toned acidity and burgeoning tannins and so the wine shows off a bit of brawn is it progresses. The tannins are beginning to show some mellowness because they’ve become powdery but you sense they were massive when young. Despite the ripe, round fruit, the structure keeps drawing your attention to an angular point that draws energy just before the finish as if the tannins and acidity want to tame its exuberance. 46% Cabernet Sauvignon, 26% Merlot, 13% Petit Verdot, 9% Cabernet Franc,and  6% Malbec. Score: 93 Alc: 14.1%

Gorgeous, simply gorgeous. Ah, so nicely pungent, you first encounter a heady mix of saddle leather, mushroom, and tobacco, resting on top of mocha, the fruit, what fruit? Actually there is some dried black cherry and dried plum filling in the background but this is very savory. There is also a leafy character and a mineral core after some aeration, just an endless parade of bewitching flavors. After years in the bottle, the midpalate is pure silk, but a rising current of powdered tannins threaded with delicate but prominent acidity produce a broad, wave-like finish showing dried fruit and a hint of charcoal.  At this point in its development it still has a very generous nose and a lively palate. The mood is intense, feral, and sort of angst-ridden, not rustic but urban tough. I was surprised that the Stones Paint It Black really resonated with this wine. Score: 96

Reviews based on industry samples