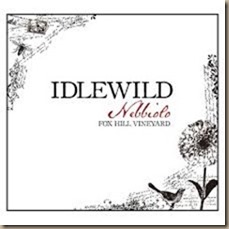 Nebbiolo, the pride of Barolo and Barbaresco, is not often found outside the fog-shrouded hills of Piemonte. This is in part because Nebbiolo is relatively difficult to grow requiring a long growing season and a cool climate. But I think it’s also a bit out of step with the contemporary preference for opulence. Although it produces beautiful wines, it is a beauty more austere and forbidding than voluptuous and lush, at least until age converts tannic severity to a more palatable gentility.

But there are a few dedicated Nebbiolo producers outside Italy. Sonoma’s Idlewild Winery is particularly interesting. They specialize in the varietals indigenous to Piemonte grown under California’s hot sun, but strive to preserve some old-world character in their wines by choosing cooler sites and avoiding excessive ripeness.

Theirs is a classic Nebbiolo right down to the visual display of orange highlights glinting off the pale garnet surface. Aromas of bright cherry infused with warm baking spices stand out, flecked with hints of dried roses, and a bit of smoke, all morphing into the earthiness of autumn leaves when given some air. This is a very expressive nose that oscillates between a spice-based and earth-based profile.

The palate opens on a very savory note, renouncing juiciness in favor of focused, angular, dusty earth. Tannins and tart acidity gather momentum early supporting sour cherry top notes and giving the wine a pleasing, abrasive undercurrent. By the time the long finish crests and begins to fade this tingling sensation has spread throughout the palate like an invasive tide. Medium weight, quite light on its feet, but firm and sinewy, it spends two years in neutral oak and one in the bottle before it’s released.

The fruit is bright enough and the spices warm enough to give this a California cast, but it liberally quotes old Italy.

Acerbic, a bit cynical but with an expressive, lyrical side, not without joy. Leonard Cohen’s In My Secret Life captures the feeling while bringing out some juiciness in the mid palate.