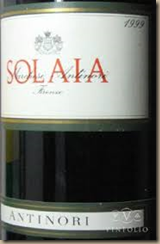 Drinking an iconic wine is in some respects like watching McCartney or Jagger perform—it is as much about the past as it is the present, as much a celebration as an aesthetic experience. Yet, there are important differences.

We know the iconic rock star is over-the-hill; that goes without saying. But we’re willing to accept the importance of reputation over performance without complaint, as long as the performance is not too horrifying. We’re content with memory filling in the chasm between an irretrievable past and an imperfect present. And so we relax and enjoy the moment.

But when opening a celebrated, aged wine there is a veneer of anxiety coating the experience. Perhaps it was stored improperly or maybe we’re opening it before its peak. Perhaps the price is more a function of reputation than flavor. 1999 was a great vintage, but will it show well enough to justify the cost? And how does it measure up to its peers? We’ve put the Stones vs. Beatles debate to rest years ago. But Solaia vs. Sassichia vs. Ornellia—that one’s still alive and must be addressed.

And so with some trepidation and anticipation we (at Wine Elite’s San Diego Wine Society) open the “99” Solaia.

Solaia is an icon because it traces its origins to the early history of the emergence of Super Tuscans. Unhappy with the poor quality of Chianti wines in the mid-20th Century, the della Rochetta and Antinori families cooperated in producing Tuscan wines using Bordeaux varietals.  Della Rochetta’s Sassicaia,  a blend of Cabernet Sauvignon and Cabernet Franc was first with its initial release in 1971.  Antinori’s Tignanello, 80% Sangiovese and 20% Cabernet followed shortly. And encouraged by the success of Tignanello, in 1978 Antinori releases the first vintage of Solaia, which is now a blend of about 80% Cabernet Sauvignon and 20% Sangiovese.  Because they violated the regulations governing Chianti wines,  they could not be sold as “Chianti” and were labeled as mere table wines. Despite the difficulties of selling high quality, pricey wines as “table wine”, quality won out and today Super Tuscans are highly-regarded, recognized by the wine laws of Italy, and the whole episode of their birth is a story of how dedicated, talented individuals can start a revolution.

Knowing the backstory provides context for appreciating a wine just as knowing the history of the Beatles or Stones helps us understand their music and its evolution. Does knowing the backstory influence our judgment of the wine? If you are aware of the story’s potential influence and consciously try to exclude it from your evaluation I see no reason why it must. To taste a wine like Solaia blind would be a waste since your awareness of its history is part of the appreciation, although not necessarily part of the evaluation.

So what about the Solaia? The first sniff exudes power. After well over a decade in the bottle it is no longer tight. Bold, black cherry and sweet, dried fig aromas leap from the glass. The rich radiant fruit flavors shade to baked earth and a seriously smoky essence, gently kissed by fennel notes in the background. The fruit is still vibrant and youthful but it is surrounded by indicators of age as the oak is becoming more integrated. On the palate, structure is front and center. Big fruit, high acidity, and firm tannins provide the framework around which more subtle qualities playfully intervene.The palate is rich and velvety on first encounter but bristling acidity swells to a crescendo which releases you into a long, spicy, finish supported by fine grained, drying tannins that are still a bit too prominent.

It has definitely entered its drinking window and if served with a big steak will be glorious. But I don’t think it has reached its peak. The tannins still need to soften a bit more. There is a toughness to this wine as if it is disdainful of too much charm. It doesn’t seduce you with graceful elegance like, for instance, a Margaux, and it is denser and more ripe than the 2009 Sassicaia I tasted last year, yet less voluptuous than the best Napa Cabs. I’m not persuaded that the best expression of Cabernet Sauvignon is to be found in Tuscany.

But it is a serious wine, deserving its reputation and its place in history.

I suppose we are willing to give aging rock stars a break, because if they are over-the-hill so are we (if we are their contemporaries). Wine is different; it is supposed to get better with age and we can demand perfection in a wine because it cannot protest our unrealistic standards.