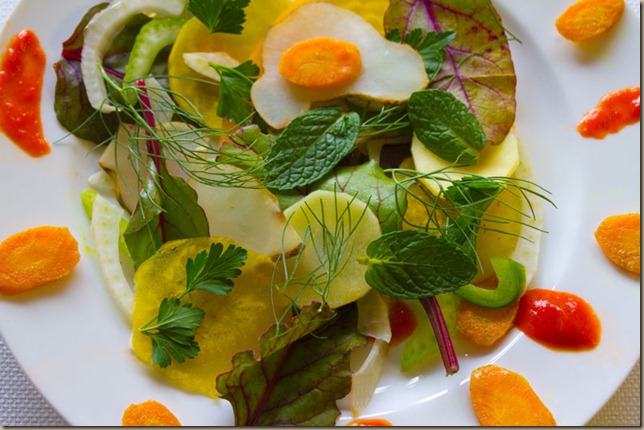 Spring is just around the corner. Even if you’re socked in with snow, this dish will give you hope.

Gargouillou is a classic dish of potatoes and ham indigenous to Aubrac, a town in Central France. But in the early 2000’s it was reinvented by renowned French chef Michel Bras as a celebration of garden fresh vegetables. His Gargouillou (pronounced gar-gu-yu) is a salad consisting of 60 individually prepared vegetables, flowers, and seeds that vary depending on what is fresh.

My version does not have 60 ingredients (only 12). My purpose is to continue testing “flavor pairing theory”, the theory that foods that share flavor compounds go well together. (The idea for the gargouillou was suggested by François Chartier, among others, in his book that defends this theory) Thus, I have included in this recipe, for the most part, only ingredients that share anise-flavored molecules.

The salad consists of  fresh fennel, celery, parsnips, yellow beets, curried carrots, Jerusalem artichokes, mint, and parsley, all of which share the anise flavor. I threw in some green and yellow bell pepper, cucumbers, baby beet greens, and red pepper puree for color and contrast.

I’ve put this theory to the test elsewhere (here and here) with mixed results. My conclusion in this case is mixed as well.

The parsnips, gently steamed in licorice water, complimented everything on the plate, as did the curried carrots, and raw fennel. The sweetness of the beets (also lightly steamed) overwhelmed anything they were paired with. They are more subtle and compliment the other flavors when served raw and very thinly sliced. The mint’s intensity was overpowering but seemed connected to the other ingredients as well.  Jerusalem artichokes taste faintly of licorice when raw, even less so when cooked. Their more prominent nutty flavor seemed quite distant from the other flavors on the dish although the combination was pleasant.

The parsley and celery are outliers. They have subtle licorice notes but both are overwhelmingly grassy and bitter. They provide contrast and tension, not compatibility.

Chartier’s wine recommendation was spot on. Salads are notoriously hard to pair with wines. But Sauvignon Blanc shares the anise note and really enhanced this dish.

After some initial taste experiments I have four reservations about this theory:

(1) It doesn’t take into account the relative amounts of a flavor compound when predicting the compatibility of flavors.

(2) It doesn’t take into consideration the fact that an ingredient has a mixture of flavor compounds, some of which may provide contrast and tension rather than compatibility.

(4) And a theoretical consideration. Balance is essential in a dish. But if so, don’t we sometimes want contrasting flavors that build tension rather than “go together”?

Recipe instructions are below the fold.

There is not much of recipe here. Just make a mix of salad ingredients to suit your mood. Use whatever is fresh.

Broil a red bell pepper until skin is blackened turning frequently. Put pepper in a plastic bag until skin loosens. Carefully remove pepper and rub of skin. Stem and seed, put in an immersion blender with a little water and purée. Salt to taste and reserve.

Add some licorice root extract to a little water in a steamer. Steam the parsnips for about 5 minutes and the Jerusalem artichoke for about 3 minutes. Steam beets if you want a sweet note; thinly slice raw if you want a more subtle flavor.

Simmer carrots sliced on the bias for a few minutes until they begin to soften. Then sauté them in a little butter and curry powder for a minute.

Cut the rest of the vegetables as you see fit.

Arrange ingredients on a plate. Add small dollops of purée on the perimeter of the plate.

1 thought on “Recipe: Gargouillou: A Test of the Flavor Pairing Theory”