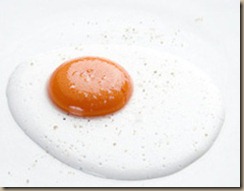 The episode has receded from the front pages, reporters are no longer camped on doorsteps, and Attorneys General have disbanded their grand juries, but the controversy lives on. Did Top Chef contestant Marcel Vigneron rip off Wylie Dufresne’s egg recipe?

I don’t know that we ever got to the bottom of this caper but New York Times food writer Julia Moskin recently linked to the old controversy so it got me thinking about intellectual property applied to recipes. Who owns a recipe? (From a moral point of view. The legal issues are murky.)

Some claim it is too hard to sort out who is the original creator of a dish and it’s common practice for chefs as well as other artists to rip each other off anyway. So their should be no ownership rights in a recipe. Other’s claim a dish as original as Dufresne’s egg recipe deserves recognition as a work just like any other work of art. Chefs who use such a dish for their own purposes should acknowledge their source.

If creations of innovative chefs deserve the status of works of art, then we cannot treat these works as replaceable fodder to be appropriated at will by chefs trying to burnish their credentials. However, most cooking joins many other forms of contemporary art best understood as a collaborative effort. The idea of the auteur—the notion that a work reflects the personal creative vision of an individual genius—strains credulity in many contemporary art forms such as rock music, jazz, or film and utterly collapses with mash-ups and digital music sampling where entire portions of songs are lifted out and inserted into a new work. The idea of an “original work” with a clear origin is, in many cases, simply inappropriate. In fact, it may be inappropriate in most artistic endeavors. As the post-impressionist artist Paul Gauguin  once remarked: “Art is either plagiarism or revolution.” If a work is not utterly unfamiliar, it rests on a foundation of borrowing from earlier works.

Cooking belongs in this category—the tradition of sharing recipes suggests the collaborative model is the right one. When a dish is an elaboration of a traditional dish, claims to originality don’t hold much water. No one owns the recipe for Beef Bourguignon and variations on the recipe cannot claim much originality even if the variation is innovative. There are only so many ways to make a beef stew, so there is bound to be many overlapping recipes even among recipe developers striving for a new take. I don’t see the point in worrying about origins in these cases.

Furthermore, it would be unfortunate if recipe developers were inhibited by worrying about duplicating someone else’s work. That would not be good for cooking or the sharing of ideas.

Of course, if the idea of a “pure origin” in cooking is a fantasy, chefs and bloggers should not hesitate to acknowledge the source from which they get a recipe. If no recipe can claim utter originality, then one should not claim it for oneself. Giving attribution must be the norm, although the question of how close a dish must be to the original to warrant acknowledgment is a difficult call.

However, Dufresne’s recipe is not a modification of a traditional dish. The current state of molecular gastronomy may be an exception to my “no auteur” point of view. These are new techniques using ingredients seldom used in traditional cookery. It is a field where innovation and experimentation is rampant and tradition typically plays little role. New dishes are, in fact, new dishes. Thus, Dufresne might have a stronger moral claim here against Vigneron than more conventional chefs.

In any case, Vigneron should have acknowledged the source of his recipe or, better, if he were truly an innovator he should have taken the advice of the Renaissance essayist Michel de Montaigne:

Amongst so many borrowed things, am glad if I can steal one, disguising and altering it for some new service.

If you are going to steal, do it well.