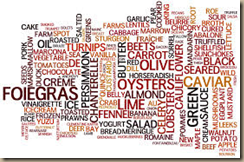 Sometimes, when social scientists get ahold of food, I wander where the food goes. Linguist Dan Jurafsky writes:

But food writing, to a linguist like me, isn’t just about food. The words you use when you write a restaurant review say as much about your own psychology as they do about which dish to order.

He goes on to describe his extensive research into the language of food and discovers:

Reviewers of expensive restaurants relied on multisyllabic words such as “commensurate”, “unobtrusively”, “sumptuous” and “vestibule”, and wrote long-winded reviews to depict themselves as well educated or sophisticated. We eat high-class food not only because it tastes good but also to signal that we’re high-class ourselves and have the “commensurate” language.

When a review of an expensive restaurant was positive, writers tended to use metaphors of sex and sensual pleasure, talking about “orgasmic pastry” or “seductively seared foie gras”, cake that is “creamier and more voluptuous” or “very naughty deep-fried pork belly” – perhaps a way of demonstrating their sensuous, hedonistic nature.

But positive reviews of cheap restaurants and foods instead employed metaphors of drugs or addiction: “the chocolate in their cookies must have crack”, “the wings are addicting” or “in desperate need for a fix [of curry]” or “craving it [pizza] pretty badly right now”. Why the difference? We’re embarrassed about eating chips and chocolate. Foods that we “crave” aren’t vegetables. We talk about food as an addiction when we’re feeling guilty. By placing the blame on the food we’re distancing ourselves from our own “sin” of eating fried or sugary snacks.

Advertising for expensive crisps, he reports, used fancier language and more often drew comparisons with their lower-priced competition, because “upper-class taste in food has the role of “distinguishing” the rich from other classes – “We’re not like those other chips.” In general, the language of food does not depict the characteristics of the food but the wealth of the diner.

Menu language is equally instructive. In a study for my forthcoming book, we computationally analysed thousands of US menus and found we could predict prices just from the words on the menu. Again, the more expensive the restaurant, the fancier the words. Difficult foreign words (“tonnarelli”, “choclo”, “bastilla”, “persillade”, “oyako”) are an implicit signal of the high-educational status of the menu writer and, by extension, the customer. But we also found that expensive menus were shorter and more implicit. By contrast, the wordy menus of middle-priced restaurants were stuffed with adjectives (“fresh”, “rich”, “mild”, “crisp”, “tender”, “golden brown”), while positive but vague words such as “delicious”, “tasty” and “savoury” were used by the cheapest restaurants.

High-status restaurants want their customers to presuppose that food will be fresh, crisp and delicious. The surfeit of adjectives on middle-priced menus is thus a kind of overcompensation, a sign of status anxiety, and only the cheapest restaurants, in which the tastiness of the food might be in question, must overly protest the toothsomeness of their treats.

No doubt, advertisers and menu writers (which is a form of advertisement) try to exploit the vanities of their clientele—that is their job. But I fail to see how a positive review of a fine restaurant could be an honest description without the use of a sophisticated vocabulary. It’s not necessarily because the reviewer is a privileged twit, but because the food was sophisticated and required a sophisticated vocabulary to describe it. Simpler foods are designed to relieve hunger so they are described in terms of satisfying a craving. I doubt that guilt has much to do with it.

The idea that food preferences are nothing but a display of class-based pretension is getting rather old and tired. 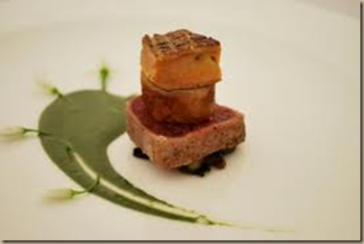 Although its moment in the spotlight may be fading, bacon, or its uncured sister pork belly, has enjoyed a lengthy starring role in the larder of the world’s finest chefs. And it has shared the stage with every co-star from ice cream and chocolate to caviar and foie gras, often stealing the show from the more celebrated partner.

But this has to be the most remarkable rags-to-riches story ever conjured by the star-making machinery. For most of its life, bacon has been lowly peasant food, what every husband was supposed to bring home, and every mother cooked for breakfast as a source of cheap protein.

According to one very prominent theory of taste, bacon’s ascent should not have occurred. Pierre Bourdieu, the late 20th Century French sociologist, argued that an individual’s idea of what tastes good is determined by social status rather than sensitivity to aesthetic quality. Good taste is a mark of distinction that sets one apart and confers high status on those who possess it. This refined sensitivity to subtle distinctions is defined against and excludes what’s “popular” and identifies one as a member of the elite, not as a symbol of wealth but as a mark of social knowledge and cultural capital. The middle class tries to emulate these “high-class” manners while the working class is forced to choose “the necessary” and cannot be concerned with the aesthetic.

In other words, according to Bourdieu, taste trickles down from the upper classes; it doesn’t percolate up from below. And bacon is distinctly lower class. To eat bacon as the star of the evening meal would send the wrong message about one’s social capital.

But a taste for bacon, as well as food trucks, macaroni and cheese, street food, etc. have a different cultural history than one would predict from Bourdieu’s model.

In fact there are many taste cultures—ethnic cuisines as well as punk, hip-hop, and alternative music and fashion—that resist assimilation to a cultural elite. Their tastes function as markers of status but have nothing to do with upbringing, money, or education but mark off an “in” group with a focus on authenticity rather than class.

Bourdieu’s theory that taste reflects a symbolic hierarchy determined and maintained by socially dominant groups was articulated in contrast to the traditional view of taste as the product of individual aesthetic judgment. No doubt Bourdieu is right that tastes are often socially conditioned.

But these counter-examples suggest a more complex interaction between social conditions and individual judgment. Genuine judgments of taste can sometimes transcend cultural boundaries and need not always reflect the social position of those who make them.